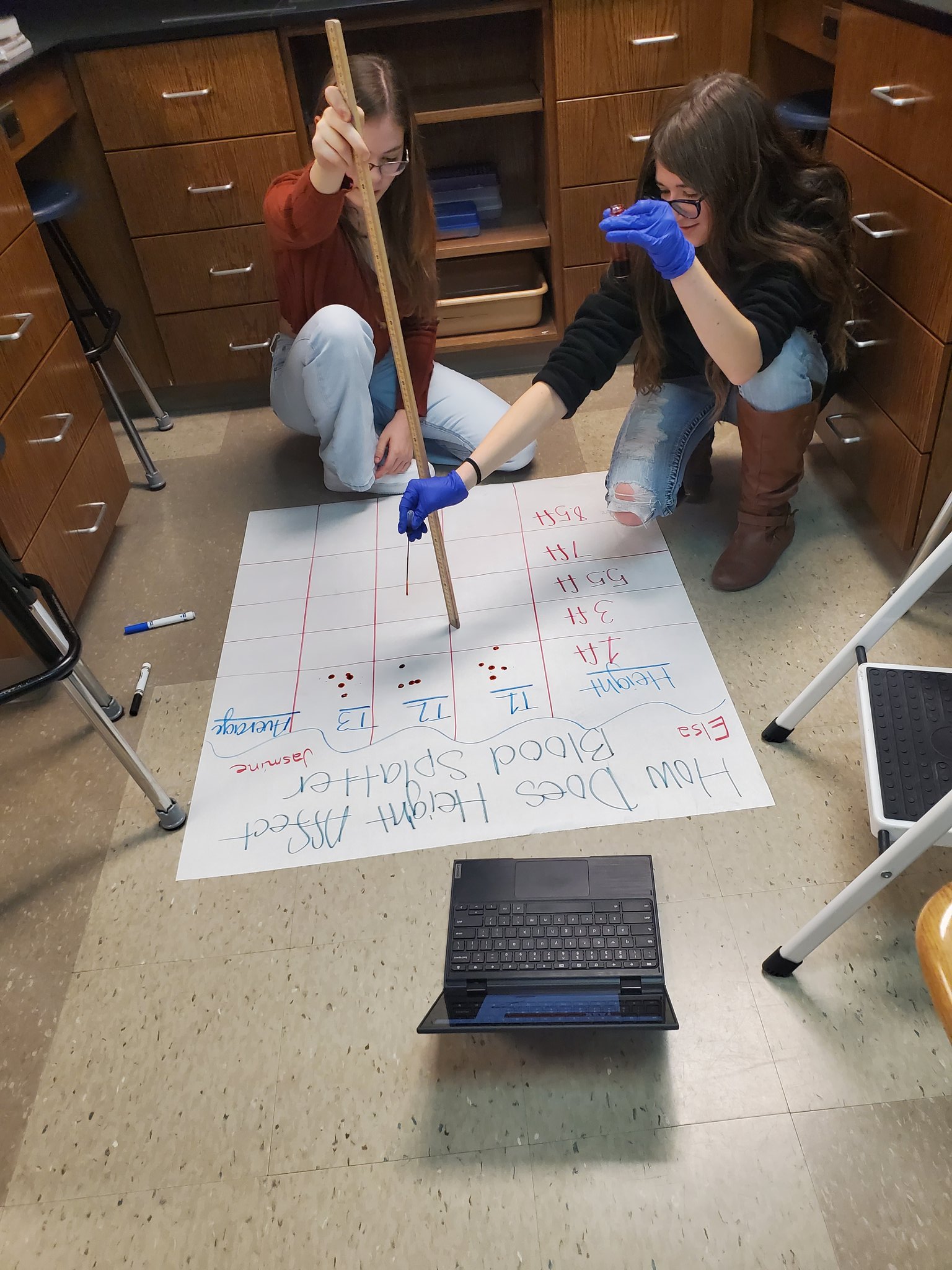 The inaugural year of Forensic Science at Fort Calhoun High School was full of inquiry, labs, and fun!  During the first semester, students learned the ins and outs of the investigative process, types of evidence, crime scene processing, and the role of forensic science in the courtroom.  The second semester was spent digging deeper into various analysis techniques used when investigating blood, ballistics, arson, toxicology, decomposition, entomology, and anthropology.  To top it off, the Forensic Science class welcomed an Omaha Forensic Technician to come to talk about real-world forensic science experiences. 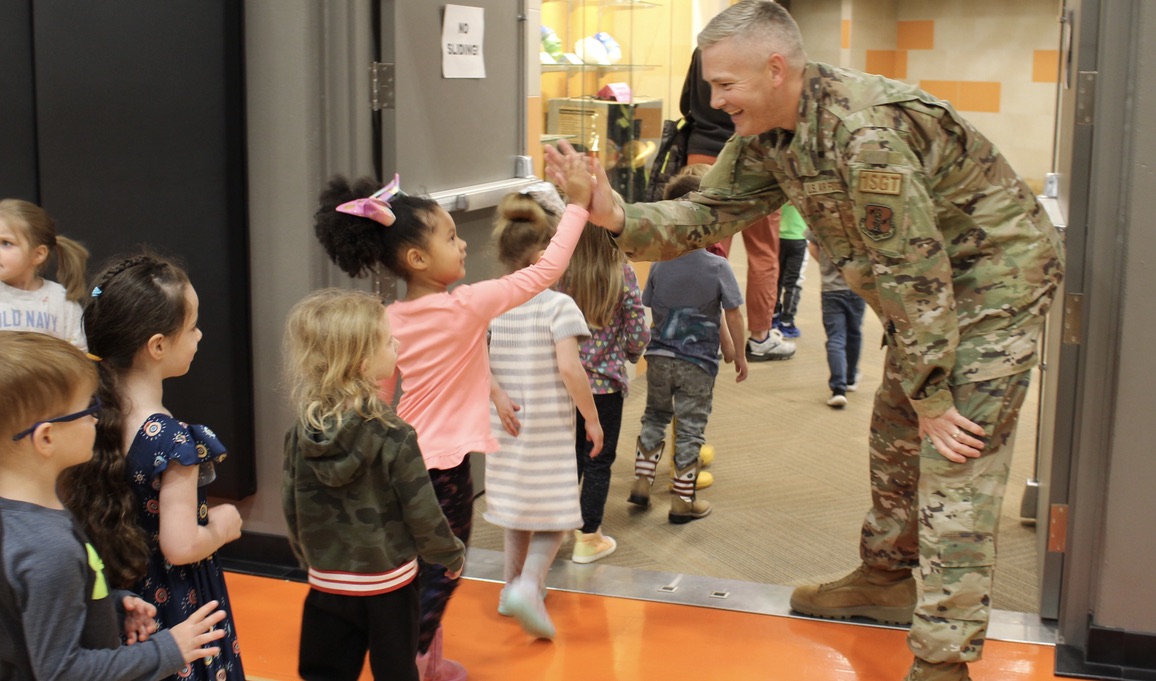 What a surprise!
Students and Staff gathered in the Elementary gym Thursday morning thinking they were going to have a Zoom call with Mr. Wagner to wish him safe travels back home. Little did they know that Mr. Wagner would be surprising them by walking through the doors instead. Mr. Wagner has been serving our country abroad the last serveral months in the United Arab Emerates. He was able to greet the students and answer several burning questions including “what animals did you see?”, “were there sand storms?” and “how is your day?” He has earned some time off and will be rejoining our staff next Fall. Welcome Back Drew! 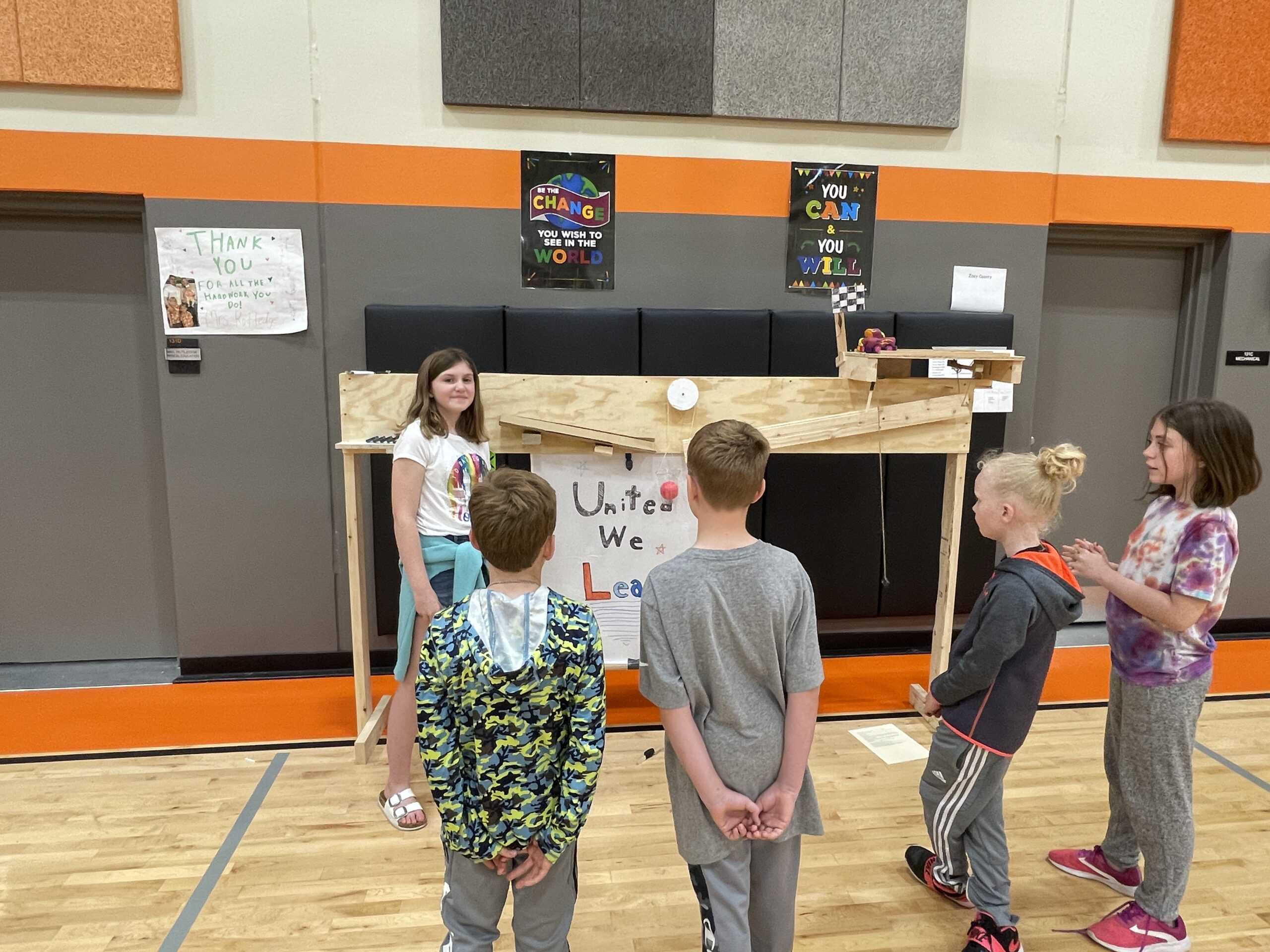 The HAL presentations on Friday, May 6th was their final step in a project centered around the creation of a Rube Goldberg Machine.  These Rube Goldberg Machines originated from some of the ideas of the famous newspaper cartoonist, Rube Goldberg, and his silly machines.   A Rube Goldberg machine is a chain reaction machine that completes a simple task but does so in the wackiest of fashion.  The project’s task was to design and construct a Rube Goldberg Machine using at least three simple machines, use at least two energy transfers, and have a minimum of five working steps all while contained in an area of four square yards.  During the project the students used the Engineering Process to identify the problem, brainstorm ideas, make models, test their machines, and finally reflect on their work.

The students were presented with the project and were asked to first start by researching about the six different types of simple machines and what is an energy transfer along with the different types.  This was followed by the students working with others in their class to design different sketches of machines based on completing different final tasks such as pouring water into a cup, popping a balloon, and ringing a bell but were not limited to just these.  They then took one of these sketches and started to bring them to life by bringing items from home and tried putting their machine together.  “Other peoples’ ‘trash’ is becoming our treasure!” is what some of the students started to say during this process.  After many trials and errors, the students got to the point of having a final machine that worked, some of the time. Then, they started to prepare for their presentation.  Mr. Mallette, Mr. Green, and Mr. Wagner were the Rube Goldberg “judges” who provided detailed feedback for each of the groups.  We also invited the entirety of the Elementary School as well as guardians of the HAL students to attend.  Some of the project tasks included painting abstract art, pouring liquids, taking selfies, and turning a page in a magazine.

I am very proud of each of the HAL students throughout this entire process of this project.  We spent about eight class periods working on these machines and they worked their tails off in each of these classes from start to finish.  Countless conversations, sketches of ideas, and trial & errors were completed during these times.  It was amazing to see these students build on their 21st century skills through collaborating with peers, communicating ideas, thinking outside the box, and persevering through “failures” with a growth mindset!  Hearing the kids’ comments of “this is the best project ever!”  “whoa, I can’t believe it worked!” with so much excitement and ownership in their work reassured me that they enjoyed the project at a high level!  It was gratifying to also see the confidence and excitement these HAL students portrayed while presenting their machines to all of these individuals on their presentation day!  I wanted to say thank you to all of the elementary students, staff, and guardians who visited and provided excitement and positive feedback to all of the HAL students, who I now can call official “Rubers” for designing and completing a Rube Goldberg Machine. 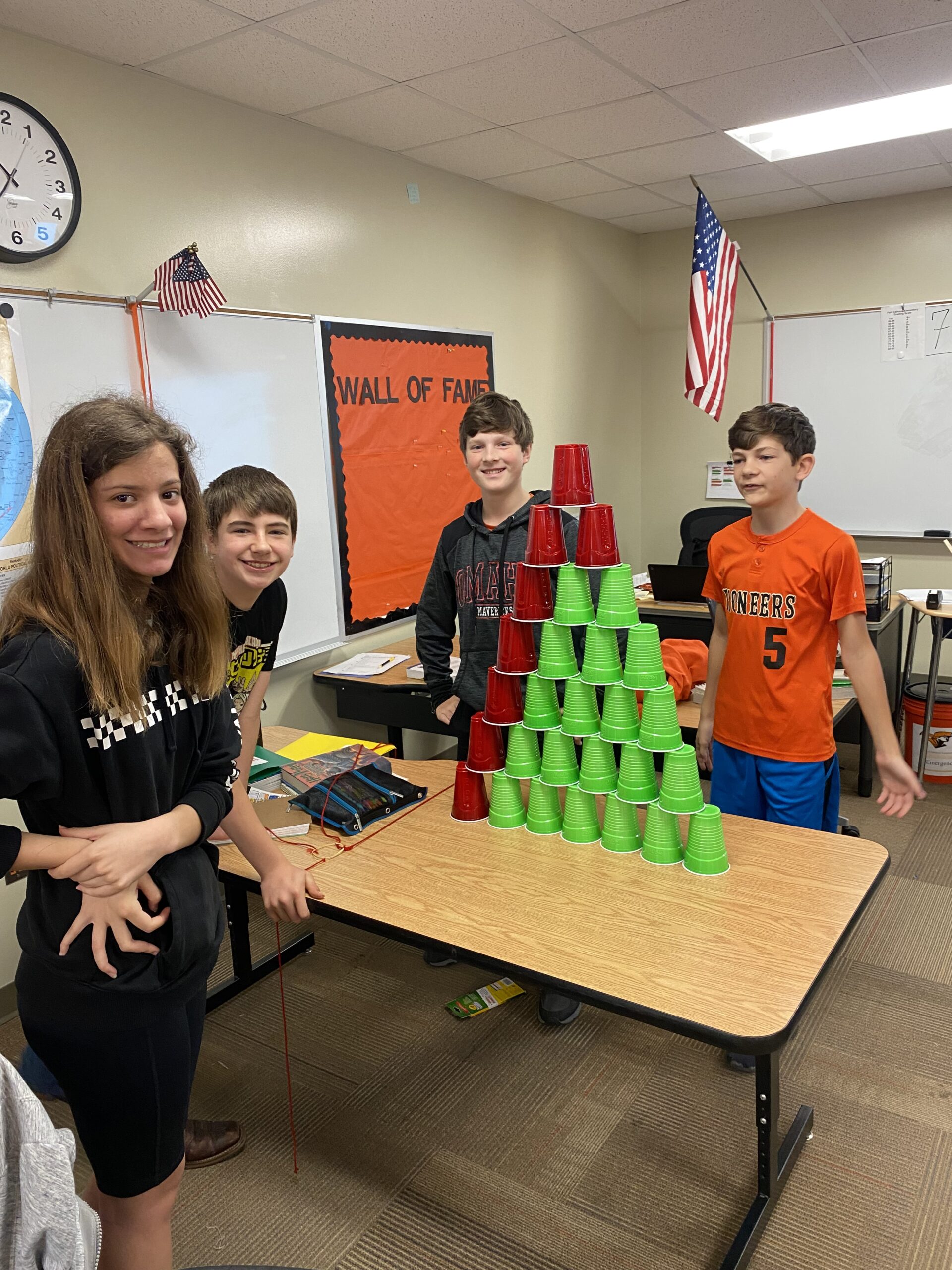 Sixth Grade learned about teamwork and cooperation. The students had to work together to stack a cup in a tower only using one rubber band and string to pick it up and place it on the tower. The students could not use their hands at all unless pulling the string. This helped them to work on communication and come up with a strategy to complete the task.