Skip to the content
Congratulations to Jake Polesky. He was one of the top entries in NETA’s 2015 Infographics Contest. He created an infographic over the grammar concept Pronoun-Antecedent Agreement using the website Piktochart.com.  An infographic visually organizes both text and graphics to communicate information. His work will be published in an upcoming NETA newsletter, which is received by educators all over the state of Nebraska. Hopefully, educators will use his piece as an inspiration to use this technology in their own classrooms.

His teacher, Sara Wellman-HighHorse, will also be recognized in the upcoming NETA newsletter for her efforts in using the application website in class.  She will also receive a free membership to this years NETA Conference held in Omaha. Mrs. Wellman-HighHorse commented saying, “I had originally learned about this creation-based website at least year’s NETA conference.  I decided to utilize it in my classroom, as it aligns with my philosophy of more project-based assessments. In addition, knowing about this contest fueled my ambition to use it even more.” 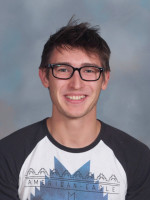