Fort Calhoun High School robotics teams participated in a Vex Robotics tournament this weekend at Elkhorn high school. Three teams competed from Fort Calhoun, with team 5053A Pioneer 1 finishing as tournament champion. The team consisted of Bret Klabunde, Zane Fickbohm, Eric Wolf, and Colton Edie. They paired with another team from Thomas Jefferson, and had a record of 6-1 through the three elimination rounds that used a best out of three format. This tournament win has qualified them for the Iowa/Nebraska Regional held at Omaha North on February 26-27, and the U.S. Open held at the Mid America center in Council Bluffs on April 7-9. 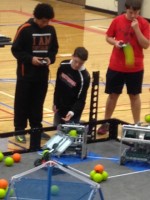 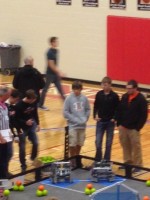